Shallistera Argo is one of the two protagonists in Atelier Shallie: Alchemists of the Dusk Sea.

She is an alchemist and the daughter of the village chief who searches for a means to save her home, Lugion Village, and travels to the oasis town, Stellard, to do so. She is given the responsibility of protecting a sacred alchemical relic.

Before the events of Atelier Shallie, Shallistera has never been outside of her village and thus has trouble socializing. She takes her responsibility to save her village seriously. She eventually takes an interest in what is happening in the world.

Just like in Atelier Escha and Logy, the player can choose Shallistera as the protagonist of the game. If chosen as protagonist, Shallistera will be the character the player will take the role of and control through the game. There are some items that are uniquely available only when playing as Shallistera, but they can be transferred to a Shallotte playthrough by equiping them.

If not chosen as protagonist, Shallistera will still be available in the game as a party member.

Shallistera travels from Lugion Village to Stellard to look for a solution to a drought her village is experiencing. She travels with her bodyguard Kortes and his father Teo. Just before arriving they meet up with Jurie Crotze a treasure hunter who had cared for Kortes when he was younger. The group is suddenly attacked by a sand dragon resulting in the ship crash landing in Stellard.

Shallistera was not used to life in the city. Since she grew up in a small village it was strange to her that people weren't just willing to help. She starts taking jobs to earn the trust of the city and repair her ship. A girl with the same nickname Shallote "Shallie" Elminus takes a job to repair a part of her ship and the two become fast friends.

Shortly after her ship is repaired, the sand dragon begins destroying other ships. A hunting party is formed to kill the dragon and she volunteers her ship. The hunt is successful and there is a great celebration.

She and Shallotte both begin assisting in Central's investigation of the Dusk and with the death of the sand dragon a path to the eastern continent is opened. The pair investigate finding the land to not be experiencing the effects of dust. However after arriving at Faav Village, they are called back to Stellard because the water supply there had begun having problems. By the time they return an alchemist had made a temporary repair on the system.

The two Shallies have a falling out over the event and go their own ways. Shallistera wants to make up with Shallote and learns that her mother has a heart condition that caused her to collapse. She is given a book by Linca with a recipe to create some medicine and decides to make it herself. However, she could not understand the recipe and it had a weak effect. She seeks out Keithgriff Hazeldine for assistance in creating a medicine that would help Shallote's mother. After proving she was serious about the recipe, he helps her finish it. In Atelier Shallie Plus she is still unable to make the recipe and a mysterious woman appears to help her make it.

Shallistera takes the medicine to Shallote's mother Nady but Shallie is not there. When she returns to her atelier inside the ship, Shallote comes to thank her for the medicine and the two say sorry to one another. With the team back together they decide to seek more information on the Dusk and why the water is disappearing. Shallote's master Wilbell seeks out the Lord of Water and learns that it has come to hate humans for polluting the land.

With this knowledge they are able to convince Keithgriff to join them. After joining he brings the group to an underground alchemy garden to reveal the true nature of ancient alchemy. They find another Linca in a glass tube acting as an administrator. The Shallies resolve to fix the mistakes of the past.

Keithgriff informs the Shallies of an underground water management system. It was taking in too much water and polluting the environment to the point it could not recover, leading to the current drought. After talking with the leaders of Stellard, they decide to shut it down even if it means there will no longer be water in Stellard. After facing off with the controller of the water system, Keithgriff re-starts the device with a reduced water intake. In Atelier Shallie Plus the Shallies are then given Flameu's seed and choose to plant it near the Lord of Water's Shrine to show humankind's intent to fix their mistakes.

In the true ending, Shallie returns home to Lugion Village to fix the water control device there. Half a year later she returns to Stellard to visit Shallote. The city had come under the jurisdiction of Central City but also gained trade routes to Vierzeberg and Lugion Village. The two resolve to face the Dusk together.

When chosen as the protagonist of the game she has access to her ability, Synchronity, which can copy any item Shallistera has in her bag, similar to Totori's Copy ability. The difference between the two is that Synchronity doesn't lower the item's power by half, but it can only be used during Burst Mode.

She can equip clothes. 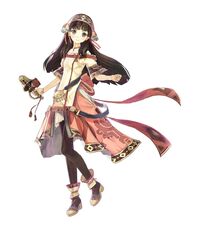 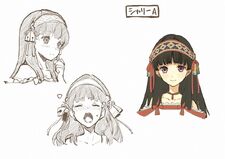 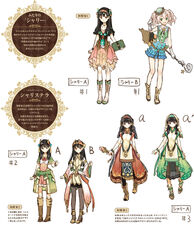 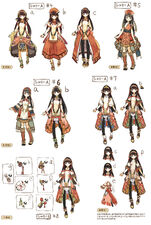 Shallistera on the synthesis screen.

Shallistera on the world map.

Gathering on the world map 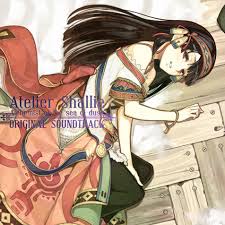 Shallistera on the Atelier Shallie soundtrack.