Head of the Stellard Branch Office

Solle is a busy young man in charge of the subdivision's budget[1]. Naturally, this also means that he is extremely good with money. He usually seems uninterested in most things and also uses harsh language when dealing with people[1]. His peers consider him a strict person[2] who is rational and efficient. He values hard workers and criticizes people who he deems as 'lazy'. He loves sweets and is always eating something. His main hobby is making sweets during his spare time, as it helps him relax after a hard day.

He gets along extraordinarily well with his homunculi co-workers, due to his ability to make delicious sweets. He has shown to be jealous when the homunculi get along with other people, such as Lucille.

Requests are recieved from Solle, and he can be found in the general affairs office[3]. Solle is the son of Colland Grumman. Colland has raised him so he will become a great government official, but their relationship is not a close one due to this.

Solle continues to work for the government. He is the person who was officially sent out to investigate Stellard along with Escha Malier. The government also wants him to establish a branch in Stellard, but the Corporation refuses to cooperate with him. After being unlocked via DLC & defeating the Sand Dragon in CH.5, Solle will accompany the Shallies in their investigations due to wanting to see things that isn't on a report with his own eyes.

In Atelier Shallie, Solle fights by relying on his Homunculi co-workers for the physical part while giving them commands during battle. While not physically capable on fighting solo like the other characters, Solle makes up for it by being the tactician of the group, having the skills to command the Homunculi to respond & react in every possible scenario during battle. His Field Burst, Hom Cheer, is incredibly useful in grinding for high level Properties, such as the various "Soul" Properties from fighting the Phoenix of the Sea on 'No Hope' mode when combined with an auto recovery item, such as an Elixir.

Solle speaking to Escha and Logy in Atelier Escha & Logy. 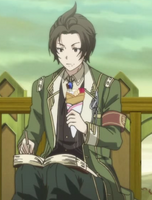 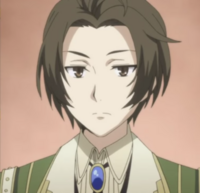