Atelier Rorona: The Alchemist of Arland

"Don't look down. I can't see your beautiful face down there..."
— Tantris to Rorona

Tantris is the pseudonym of Tristan Alcock, a character appearing in Atelier Rorona.

A former resident of Arland and a flirtatious musician, Tantris is a playful ally of Rorona. It is revealed that he is the son of the Minister of Arland, Meredith Alcock, although the two have an estranged relationship. He greatly enjoys the company of women, which is even apparent in one of his passive skills. Taking an interest in Rorona, he offers to become her "shield" during her travels, all while disregarding his orders to sabotage Rorona's workshop.

He enjoys playfully teasing Rorona, and feels a bit guilty about Meredith's desire to interfere with the success of her workshop.

However, despite the strained relationship between he and Meredith, Tantris still cares about him, and truly wishes for his approval.

Tantris appears early in the second year as a wandering bard, playing his song to an audience of woodland animals, when Rorona stumbles in, scaring the animals away. Rorona heads off, slightly embarrassed. Later, he appears in the workshop, and offers to accompany Rorona next time she leaves town. It is later revealed that he is Meredith Alcock's son; however, the two don't seem to get along, nor see eye to eye. Meredith asks for his help in closing the workshop, but Tantris has little interest. At the same time, he doesn't think Meredith is doing an effective job hindering Rorona, and decides to not get involved.

Tantris can join as soon as the fifth assignment, after a couple of events involving him. He joins at level 18, equipped with a Knucle and Traveler's Wear. 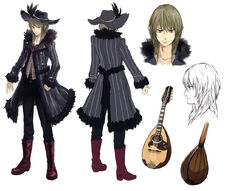