Tao is childhood friends with Ryza and Lent who, together, aims to venture out to the mainland and explore the world out from their homeland, although he is the most hesitant out of the group to actually join the voyage. His family owns old books that contain ancient language and aims to discover and learn it as they travel.

He is the brain of the group, analyzing the great unknown of words unfamiliar for all of them. Though, he is also the least courageous in the group and is always reluctant to venture out of his comfort zone but never really backs out as he cares deeply for his friends so in the end, he never leaves them behind.

Tao can be played as the center character exclusively on his very own DLC Episode: Interwoven Fate.

Childhood friend of Ryza and Lent. Tao always walks around with a cryptic old book he found in the basement of his house. Since he's continually trying to decipher it, the villagers consider him to be eccentric. Although he's timid and not the best at socializing, he never abandons his friends. He has a thirst for knowledge that borders on being obsessive, and an extraordinary ability to concentrate.[3]

Tao mentions his family's heritage when it comes to involvement into some kind of repairing and maintaining ceremonial altars. The whole truth about this, in addition to why his family had a lot of books at his house with a different set of language, is that the Mongarten Family are the supposedly ones who are tasked with the maintenance of the island since it was first made.

Eventually Tao and Bos become more closer as they were back in childhood as both gives each other a helping hand in researching more about the island, as well as Tao giving Bos information what he knows about the island's origin.

As briefly mentioned at the end of the first game, Tao leaves his homeland and studies abroad together with Bos in the royal capital. Currently he is working hard every day to become a scholar. Over the last three years, his puberty drastically changed his appearance as he have grown quite tall, now not having any image of being bullied. He still haven't changed his preference for reading alone though, but since the capital has so much to see and stimulate, Tao now spends more time outside than when he was, constantly and reluctantly, on the island.[4] 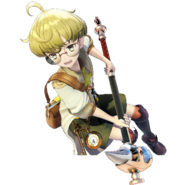 Tao and others spying on Ryza

Tao with the complete party

Tao and others at the beach