"An older schoolmate who keeps trying to pick a fight with Vayne. According to Flay, he is "The Peon of Evil." He has a foul mouth and a bad personality. You never see him with anyone else but Renee, so he seems to have very few friends. He has a short temper but his combat and alchemy grades are actually pretty good. He seems to be acting under someone else's orders..."
— Character Entry

He is frequently seen with Renee Kearse and the two will attempt to undermine the workshop group. He is shown to be quite cowardly and is prone to use underhand methods as well as violence if necessary such as his first meeting with Vayne. But when Flay came in and ask if he was willing to challenge him, Tony promptly back down or during the School Arena event where he kidnapped Jess to force Vayne to surrender. He is also shown to not be against hurting the elderly as long as he can get his way, where even Renee stated it was too low even for them, although it did not end so well for him.

Tony wields a scythe and has a largely melee-oriented move set, but his Spiral Flare spell can hit multiple party members at once. Unlike Renee, he does not inflict the party with Sleep or summon enemies into the battle, usually making him the lower priority target.

In Chapter 6 and onward, Tony has an extra trick up his sleeve: if the battle drags on long enough, his auto-skill Path of Evil will activate and his Mana will join the battle. This is a time-based interrupt and ignores the normal turn order. Rather than acting as a separate enemy, the Mana upgrades all of Tony's special attacks for the remainder of the battle and appears during their animations. 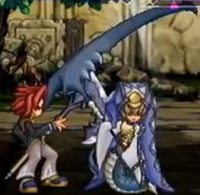 He is a school teacher as well as still a rival to Flay, constantly telling his class not to lose to Flays class. It was also stated that he's married and had kids but hasn't been home in years.

Retrieved from "https://atelier.fandom.com/wiki/Tony_Eisler?oldid=38671"
Community content is available under CC-BY-SA unless otherwise noted.