Whim is a playable character appearing in Mana Khemia 2: Fall of Alchemy and the PS3 game Cross Edge.

Whim is the loyal maid and servant to Lily. She is a water Mana who has been serving the Vehlendorf family for generations & has a fondness of dressing like a maid.

She refers to her master Lily as 'Miss Lily' and is greatly devoted to her, even performing all of Lily's battle commands for her in combat. Whim has a tendency to be very blunt, which can sometimes cause her to be 'punished' by Lily often. She goes to great lengths in order to please Lily, and travels with her wherever she goes, even following her to Al-Revis Academy.

Whim's true form as a water mana is that of a mermaid, with a similar appearance of Undine.

Both Lily & Whim share the same skill set as Whim does all the fighting while Lily gives the commands.

Her & Lily's Finishing Strike is Metamorphnaga: Where Lily backs away from Whim as she changes into her mana form and attacks the enemy by shooting them into the air with a massive tidal wave before freezing it & then shattering the frozen tidal wave by piercing through it with her trident before changing back & rejoining Lily's side. It's a Magic / Water type that attacks a single enemy with x3 HIT.

(Note: Whim & Lily's upgrade skill can only be triggered through side events, not by Grow Book.) 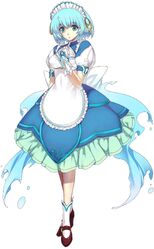 Whim with Lilly and Raze
Add a photo to this gallery

Retrieved from "https://atelier.fandom.com/wiki/Whim?oldid=33690"
Community content is available under CC-BY-SA unless otherwise noted.